Caring for the supporting structures of your teeth.

Periodontics is the area of dentistry that cares for and treats the supporting area around the teeth. This includes the gums, supporting bone structure and literally taken, the word periodontics means study of that which is “around the tooth”.

Advice for patients with periodontal disease.

An understanding of periodontal disease is essential to assist in its prevention and its successful treatment. It is for this reason that a “question and answer” advice sheet has been prepared. It is intended primarily for patients suffering from periodontal disease in order that they may acquaint themselves with some of the problems that have arisen in their mouths. This information will also be of interest for any individual wishing to prevent its occurrence. 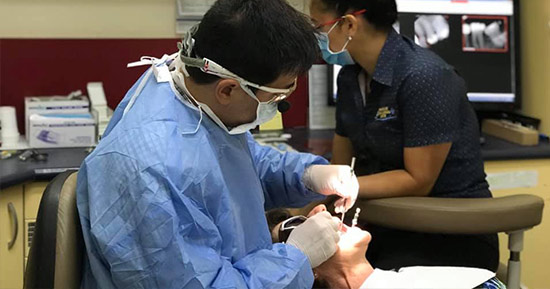 What is Periodontal Disease

Periodontal disease is a slowly progressing chronic inflammation that affects the structures supporting the teeth. These supporting structures are the gums and the bone that holds the teeth within the jaws by means of fibres known as the periodontal membrane.

How does periodontal disease appear in the mouth?

Periodontal disease develops in two stages.  The early stage is known as Gingivitis (inflammation of the gums) and the later stage as Periodontitis (inflammation extending into the bone). The terminal stage of this disease was once referred to as “Pyorrhea”, where teeth become loose, surrounded by pus and eventually fall out by themselves.

In the early stages the gum bleed when brushed or, sometimes, even when touched. The gum gradually becomes red, swollen and move away from the teeth forming pockets. There may sometimes be an acute phase (known as “trench mouth”), when there may be some pain. Generally, the condition is PAINLESS and causes so little discomfort that it is often neglected for many years, until diagnosed by a dentist

When gingivitis is neglected, the inflammation extends deeper into the tissue causing the gum to separate from the teeth even further resulting in the formation of deeper pockets which then act as breeding grounds for bacteria and will eventually fill with pus. The inflammation thus extends into the bone surrounding the teeth, which may then become loose, drift out of position and will eventually be lost.

Gum abscesses may form at any time during the above course of events.
REMEMBER: AN ADVANCED STAGE OF PERIODONTAL DISEASE CAN BE REACHED WITHOUT HAVING EXPERIENCED ANY PAIN OR DISCOMFORT WHATSOEVER.

Bacteria are normally present in the mouth. In order to cause periodontal disease they must remain undisturbed at the margin where the gum meets the teeth, particularly in between the teeth. They accumulate and multiply in the form of an invisible film known as PLAQUE.

Plaque accumulates on the tooth at the gum margins every twelve hours following its complete removal.
Where plaque is not removed it may remain there indefinitely, thus causing periodontal disease at those sites.

Plaque, together with some constituents of the saliva or pocket fluid, forms tartar (calculus). This is a hard crust-like material which is deposited on the teeth and on to which further deposition of PLAQUE takes place, thus increasing the amount of calculus.
Once formed, calculus can be removed by a dentist or dental hygienist with special dental instruments.

Other common sites for the formation of bacterial plaque are:

The chief reason for treating periodontal disease is to preserve the natural teeth. Without treatment there is a continuation of the destruction of the supporting tissues of the teeth.

Periodontal Disease Can Be Prevented?

Have regular periodontal screening and periodic x-ray to reveal otherwise undetectable changes in jaw bone. Remember there will usually be no pain or discomfort to warn you.

Do Antibiotics play an important role in the treatment of periodontal disease?

YES AND NO. Antibiotics, particularly tetracycline are essential as adjuncts to the treatment of certain aggressive form of the disease. Antibiotics are often administered to prevent post-treatment infection when surgery has been extensive. . Although Periodontal disease is of bacterial origin; Antibiotics alone are not a solution to the eradication of the
disease

How long will the treatment take and how much will it cost?

This will depend on the nature and severity of the disease. Generally, the fee has a direct proportion to the treatment time involved as well as to the complexity of the procedures required. Do not forget that your dentist and dental hygienist may have to spend several hours teaching you correct oral hygiene procedures and checking your progress at frequent intervals besides repairing the damage that has resulted.

What does treatment involve?

In order to assess the state of health in your mouth, a dentist must examine your mouth and, if your suspicions are confirmed, a detailed clinical examination must be undertaken. This examination consists of inspection of the gum tissue, measurements of the extent of gum disease around the entire mouth and the taking of a set of full-mouth radiographs. The dentist will then discuss the results of the examination with you and outline the treatment that will be required to restore your mouth to health.

Treatment usually consists of the following:

What happens when treatment has been completed?

You will be scheduled to commence a periodontal maintenance programmed which will consist of three-monthly visits to a dentist or oral hygienist. This interval may be reduced or extended depending on several factors such as the original extent of the disease or your progress following treatment, and your ability to effectively remove plaque.

Will treatment ever have to be repeated?

USUALLY NOT. Sometimes an isolated area may require further treatment. With treatment may never have to be repeated. During maintenance therapy, screening will be carried out to ensure that your oral hygiene technique remains efficient and to detect and treat any recurrence as early and as simply as possible.

Can periodontal treatment be guaranteed?

NO. It is against the law for members of the dental or medical profession to guarantee treatment. We are dealing with a biological science in which responses to treatment usually vary. We can, however, guarantee that once treated the disease WILL RECUR IN THE PRESENCE OF PLAQUE.